Take a virtual tour by clicking on the orange numbers on the map below.
If, after the tour you want to know more, you might like to look at the research reports on the Radcliffe Manor Project pages. 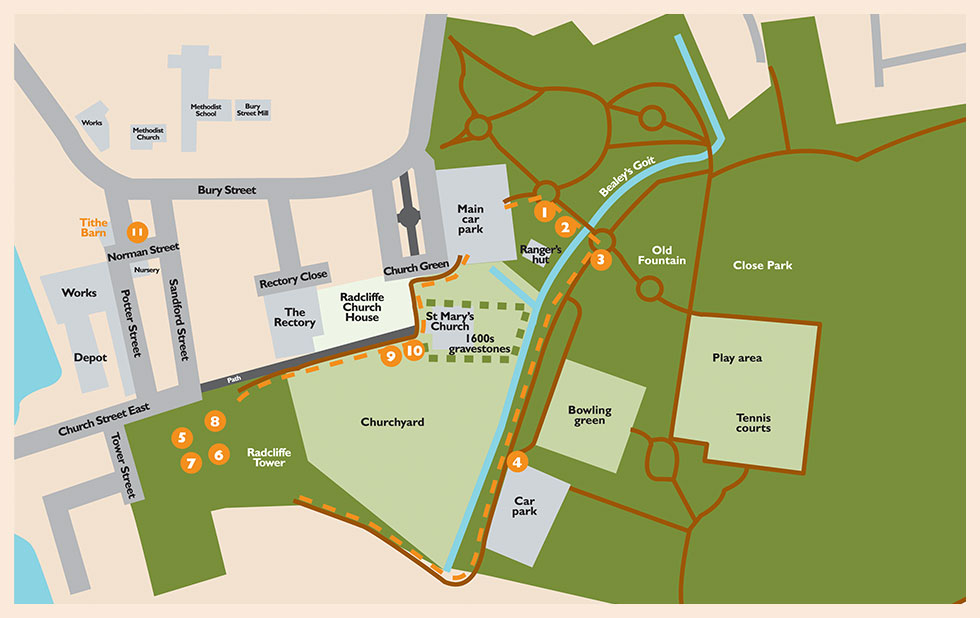 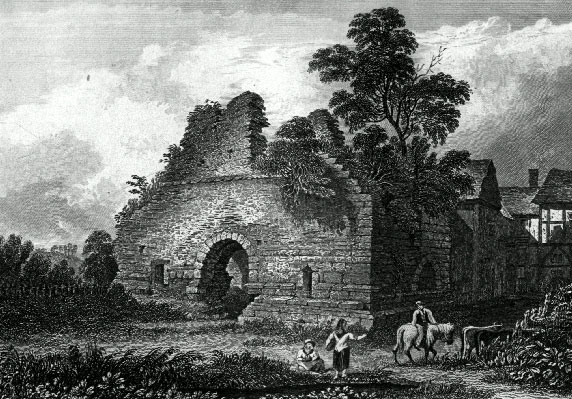 After the Norman Conquest, land near the meeting of the rivers Irwell and Roch became the seat of a wealthy and powerful family who took the name ‘de Redclyffe’ from the nearby river cliff. They built a series of manor houses, a great hall, pele tower and church. Today, St Mary’s church and the ruins of the tower are the only visible medieval remains.

The land passed through various ownerships and a large part of it was eventually acquired by the Bealey family, who built a bleachworks, school, chapel, hospital and worker’s houses.They also built and lived in a large house, Close House, which stood on this spot and whose grounds became Close Park.

A history trail has been developed which you can follow from the park to the tower and through the churchyard back to the park.

The Bealeys, Close House and Park 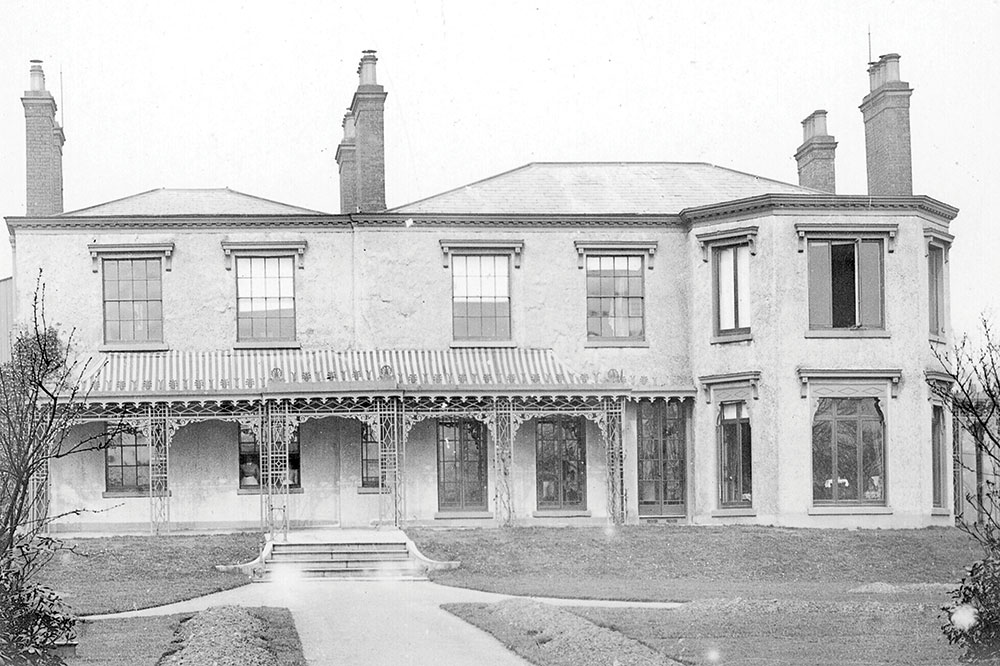 The Bealeys came to Radcliffe around 1732 and as their business developed they became a philanthropic family, building an Infant School (1800),Wesleyan Methodist Chapel (1839), Convalescent Hospital (1903) houses for workers and contributed to a great many other good causes.

By 1837 they had built 3 houses on this area known as The Close. Close House (see photo) was built around 1850 and the last one to remain standing. In 1925 the gardens were gifted to the town to be used as a public park and the house as a child welfare centre. Close House was later used as a museum and an ambulance station, finally being demolished around 1969.The only surviving structure associated with the house is the fountain near the child’s playground.The site of house and grounds became Close Park. 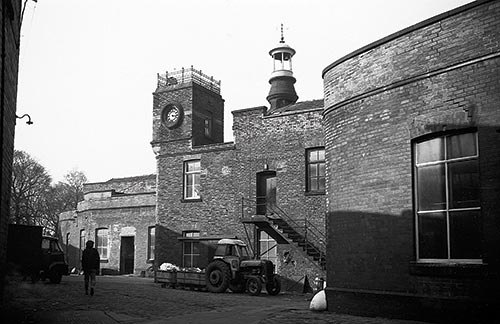 You are looking at a surviving section of Bealey’s Goit. This channel was built around 1760 to carry water from Bealey’s Weir, on the River Irwell 1 mile away, to Bealey’s bleachworks on Dumers Lane (where the Riverside Road estate now stands) and eventually back to the river. Water was stored at an intermediate reservoir now known as Swan Lodge (a Site of Biological Importance). The surviving sections of goit are now fed only by surface water run-off.

The Bealey family is first known to have leased land for a bleachworks in 1750. The original and natural way of bleaching cloth was to lay it out in the fields around the works. Joseph Bealey developed the new technique for producing bleach (sulphuric acid) in lead chambers. Their works and property expanded and by 1841 the Bealey’s controlled 230 acres around this area.

The works was demolished around 1980. The clock seen in the photo has been preserved and is kept by Bury Museum.

The weir was re-built in 1811 and still survives. A small hydro-electricity generating plant now makes use of the goit intake. 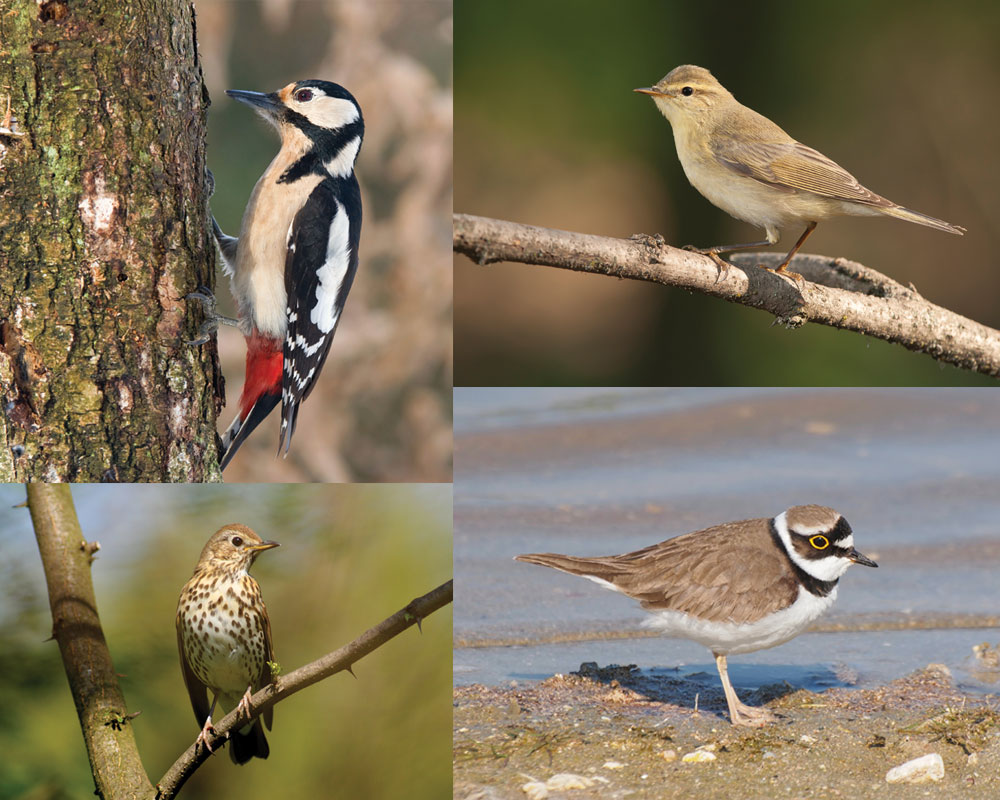 In a wide loop of the River Irwell and backed by the red cliffs on the south bank, archaeological digs in 1949/50 found evidence of a settlement dating back to 6000 BC.

The large expanse of meadows, known as the E’es, offered farm land for rearing animals and growing crops for hundreds of years. Both the Manor and Church were able to collect a good share of the products throughout the medieval period.

Traditional hay-making in these fields encouraged a rich variety of plants and wildflowers that remained right up to modern times.

Though many habitats were lost with the coming of industry and then waste tipping, biodiversity is now increasing as the land is reclaimed by nature.

Bealey’s Goit is home to Mallard ducks and along the banks are ferns, bramble, willowherb and iris. 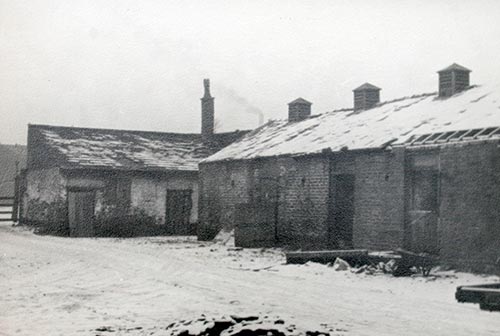 Around 1670 the manor house site became a farmstead. Tower Farm evolved over the next 300 years as a collection of buildings facing Church Street East. The entrance to the farmyard was where the current gates stand. The farm worked land southwards to the river.

In the 1830s the manor house site was acquired by the Bealeys who used some of the materials to build a row of ten houses on Tower Street. The back yards of these houses were excavated in 2013. Each house had access to outdoor ‘Tippler’ toilets which were flushed using waste water from the kitchen sink.The mechanism for collecting the water was counter-balanced so it operated when it was full rather than when the toilet needed flushing! 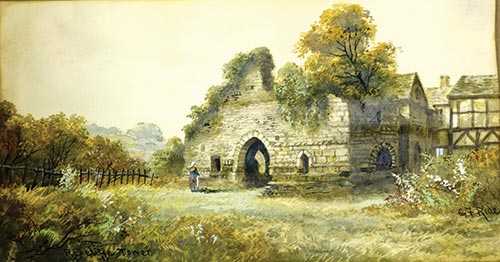 Although it has been much modified since it was built, the Tower, which probably originally stood alone, was eventually incorporated into the manor house of the de Redclyffe family, one of the most important families in medieval Lancashire. The tower was probably already standing in 1403 when James de Radcliffe was granted a ‘licence to crenelate’ (permission to fortify with battlements) and rebuild his manor house, by Henry IV.

TheTower is a PeleTower,a form of medieval fortification found in the north of England and Scottish Borders and at Radcliffe was probably three storeys high. Originally the ground floor would have been used for storage, with living accommodation above. However, when the hall was built adjoining it, the ground floor was most likely converted into a kitchen with the insertion of up to three fireplaces.

Entry on the ground floor was via a wooden door, secured from the inside by two wooden bars held in ‘draw holes’ set into the wall on either side of the arched doorway.

The remains of a stone stairway built into the thickness of the wall indicates access to the first floor, which probably had another fireplace.These upper floors were probably used solely by the de Radcliffe family. 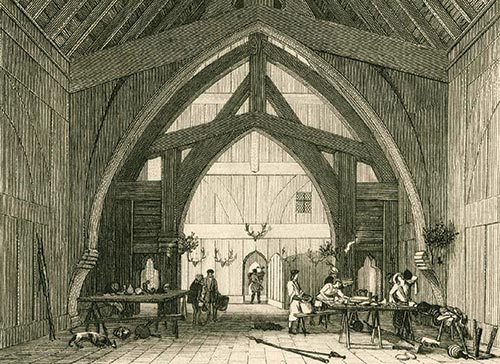 Radcliffe was a saxon manor before the Norman invasion and is mentioned as a Royal Manor in the Domesday Survey of 1086. The de Radcliffe family, who took their name from the local sandstone outcrop, is known to have had possession of the manor by 1193. They may have lived in a building pre-dating the one pictured, which was probably built at the same time as the tower. By 1517 it had ceased to be used as the de Radcliffe’s chief family home. The Radcliffe estate was sold to the Assheton family in 1561 and in 1765 the estate transferred, through marriage, to the Wilton family of Heaton Hall, Manchester. As the house was not maintained, it became dilapidated and was demolished around 1840. It was sold as building material to the Bealeys and some was used in the construction of Tower Row, now known as Tower Street.

The outer west wall of the tower show the shallow slots into which the ends of the house roof timbers were set. The great hall would have had a wooden screen at the end to divide the kitchen (situated in the tower) from the main part of the hall, where members of the household took their meals and probably where the servants lived and slept. The hall led to the manor house, where the gentry lived.

Church Row and the Church School 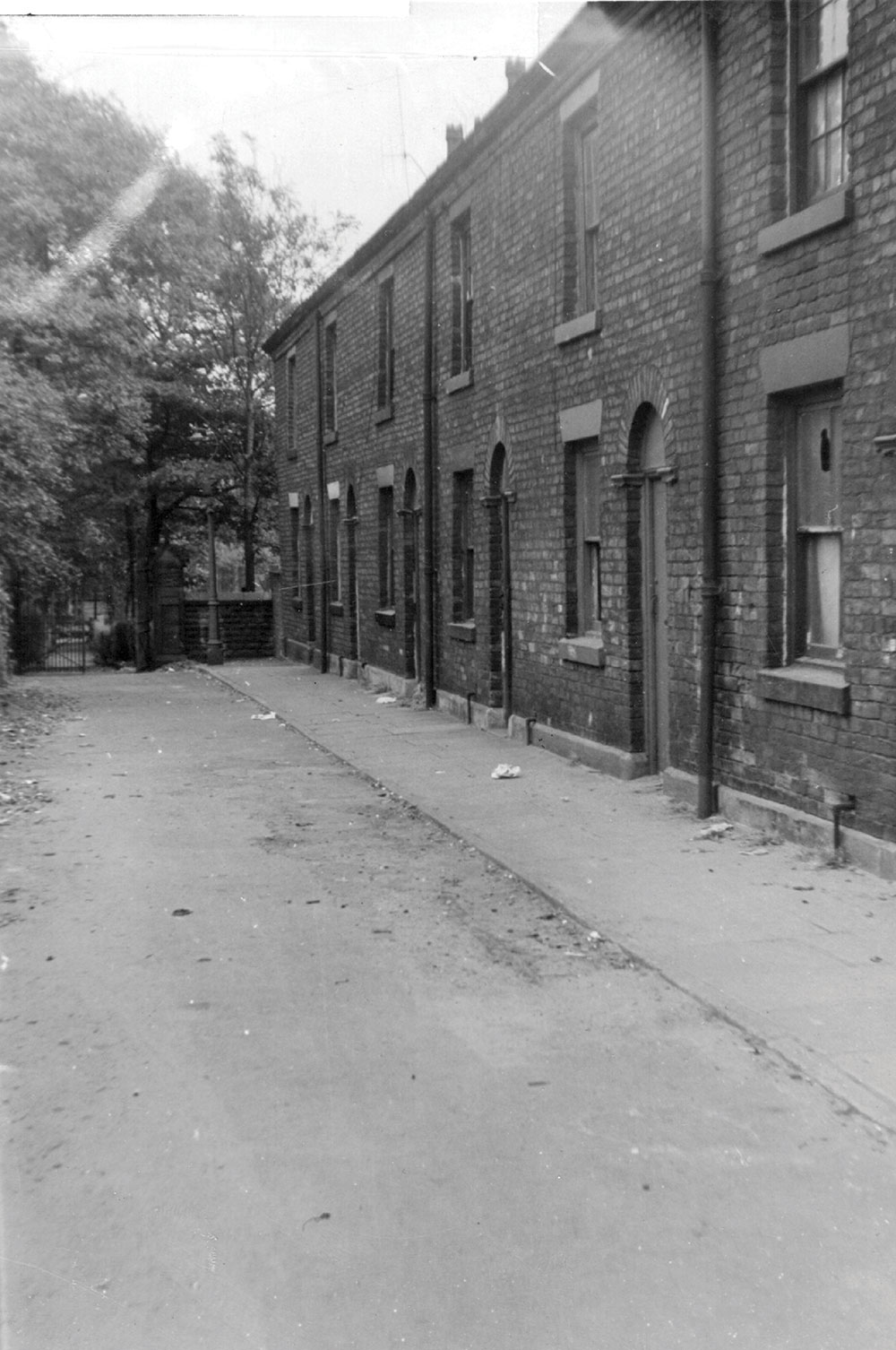 On the south side of the Church Street East, leading to the churchyard west gate was a terrace of seven houses that stood here from the 1830s to the 1960s.They were possibly built by the Hutchinson family to house workers from their print works nearby.

James Bogle (a calico printer) and his family lived in No.1, the house next to the churchyard wall at the top of the row, for almost 40 years. Their family grave is a few yards away in St Mary’s Churchyard.

During the 2012 Dig Greater Manchester community excavation a Catholic token was found in the backyard of the Bogle’s house, a ‘Children of Mary’ medallion. 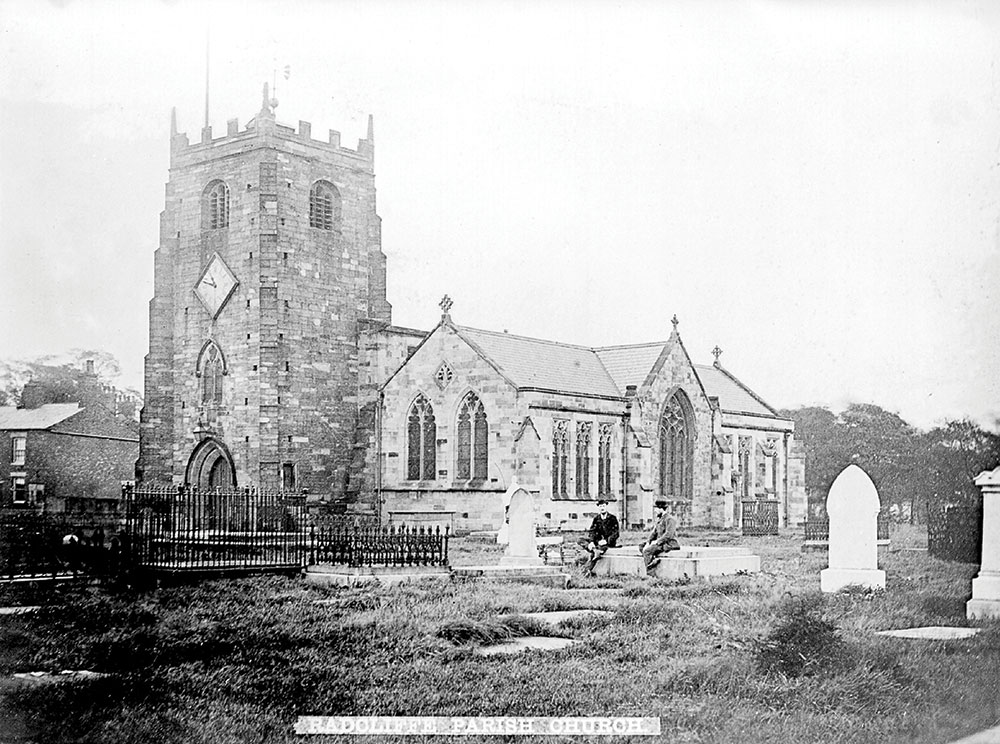 A church existed on this site in Saxon times, part of the Royal Manor of Salford and diocese of Lindisfarne. After the Norman Conquest it was rebuilt around 1190 by William de Radcliffe (Lord of the Manor).

The first rectors were recorded from the 13th century. The church and the rector were supported by the manor, glebe lands, and tithes.

The oldest surviving parts are the 13th century chancel arch and the 15th century nave and arcades.The tower was rebuilt and altered in the 15th and 17th centuries, the latter under the guidance of Charles Beswick (Rector 1662 – 1697) and as part of work to rectify the decline under the reformation. Although the church has undergone many alterations over the centuries, the latest being 2013, it has maintained its medieval character and is a Grade 1 listed building.

There are several pieces of note, including a fragile alabaster effigy of James de Radcliffe (also his wife and 3 children) who did much to rebuild the manor and died in 1410.The stone is preserved beneath the Holy Table.

The oldest piece of stained glass depicts a crowned head, reputed to depict King Henry IV. The original square faced clock, fitted in 1785, is now part of the pavement outside the vestry door. The Lych Gate was erected in 1922 as a thanks- offering for the safe return of men from WW1. 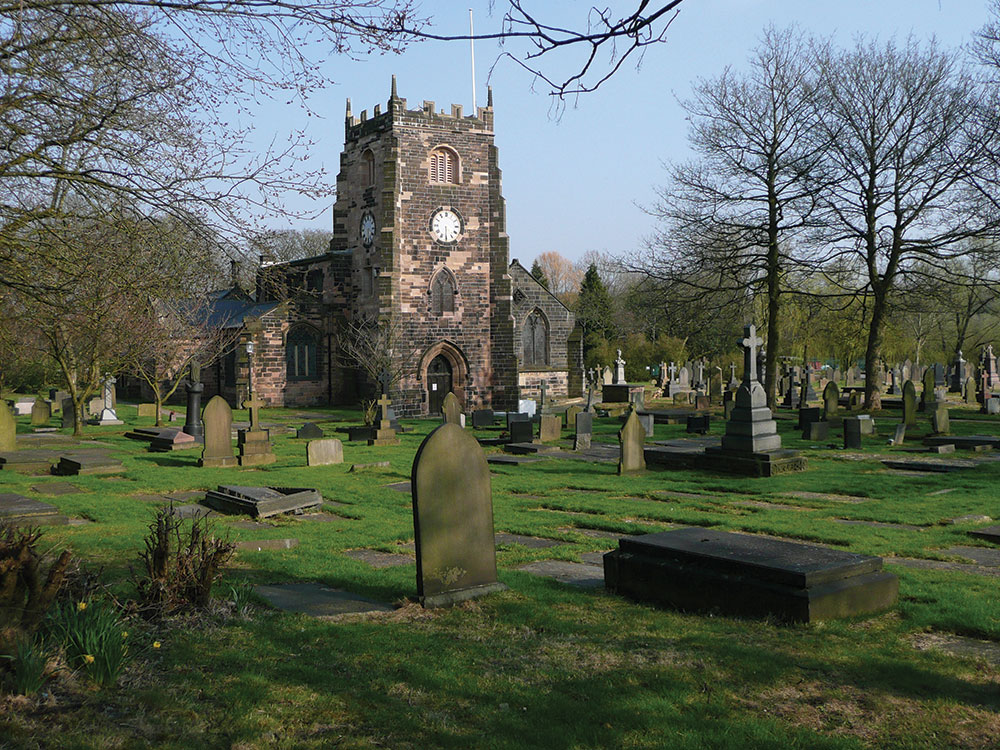 There have been burials on this site since 1202. Generally the gentry would be buried inside the church and the rest in the churchyard.The first burial formally registered here was in 1557 and between then and 1925 there were 17,054 burials in the churchyard! If you explore the churchyard you can find many interesting burials and memorials.

The Bealey memorial. The family moved from Cheshire to Radcliffe in the 1750s to set up a bleach works in Dumers Lane.They were leaders in their field and one of the first companies to make sulphuric acid for bleaching powders.

Radcliffe War Memorial. The Lancashire Fusiliers Regiment Roll of Honour on the Kemp Memorial in the church porch lists local soldiers who died from different regiments in both world wars. Laid to rest in the graveyard are six soldiers from the First World War and three soldiers from the Second World War. 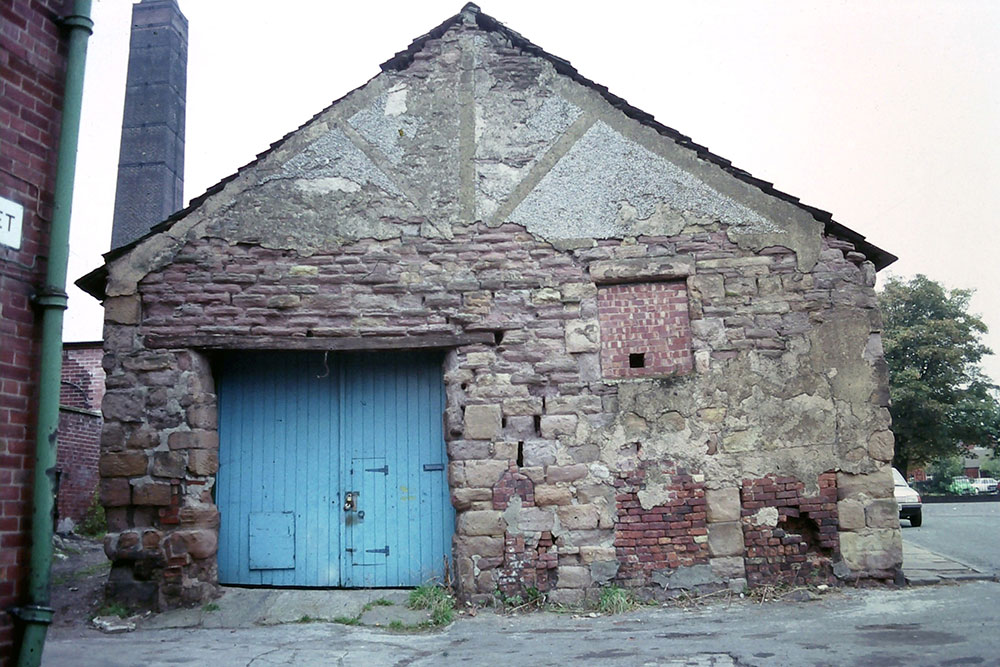 Tithe barns were built to store produce from church lands, or taxed goods, in support of the priest and parish.

This barn is associated with the settlement around the medieval manor of Radcliffe, but may not have been a tithe barn. Its size and construction detail suggests a general barn for the storage of produce and a range of animals and is thought to be of 17th or early 18th century origin, built after the hey-day of Radcliffe Manor. It has been built from both red and yellow sandstone, possibly with the latter re-used from the nearby Radcliffe tower as it fell into decline from the 16th century onwards.